Final day of the Poker Championship started with a $40,000 guarantee No Limit Hold’em Bounty. The windy, rainy day didn’t deter 238 players from entering, generating a prize pool of $44,420.

Final event No Limit Hold’em bounty with $10,000 guarantee timed event with Action Clock had 100 players joined in with a prize pool of $13,550

Congratulations to our Champion of the Series, Hanth Tran! 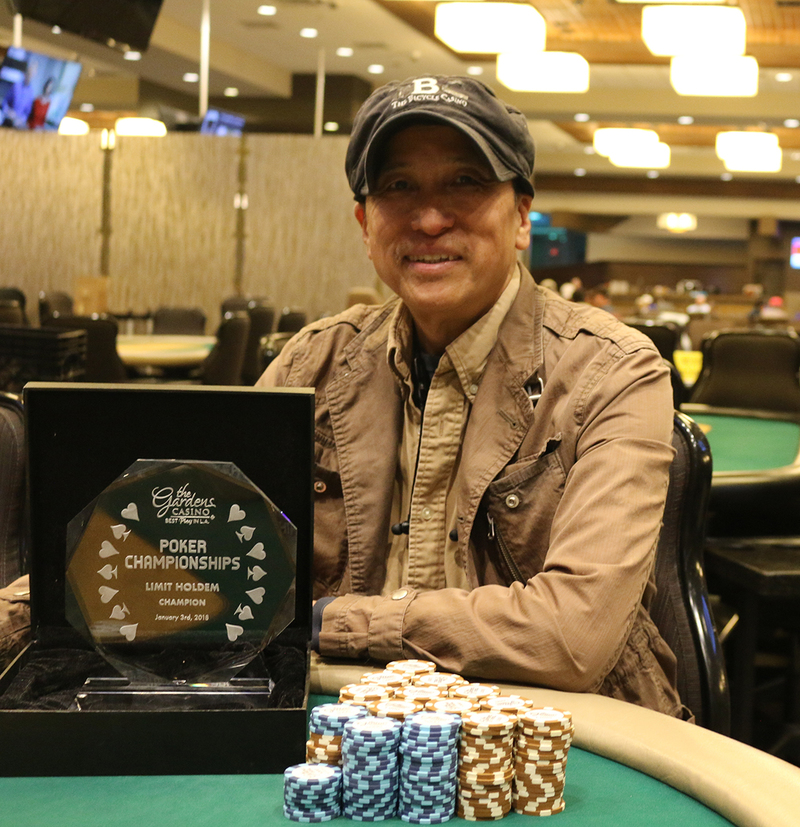 No Limit Hold’em $10,000 gte Seniors event brought a nice crowd of 123 players generating a prize pool of $16,770. The event ended with the final 10 chopping and George Jura as chip leader 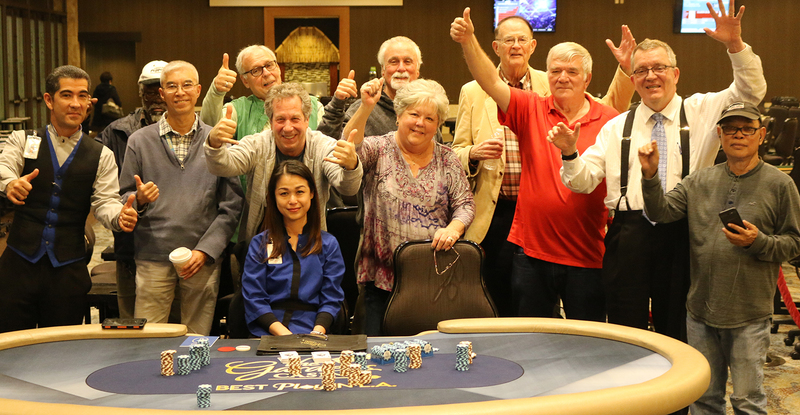 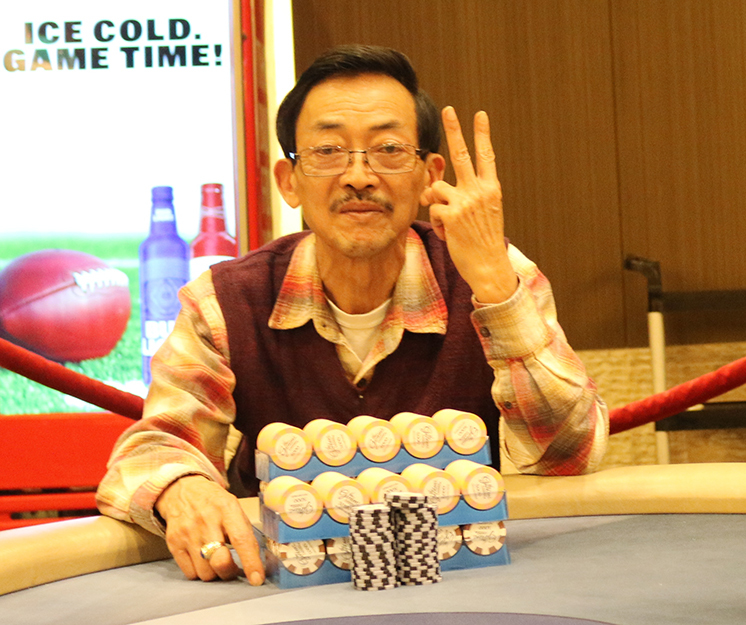 Our new progressive bounty with $50,000 guarantee pulled together a total of $54,940 and out of that, $14,000 in bounties. Final ten chopped with Narak Pananyan as Chip lead. Mr. Pananyan took home $6,010 plus bounties. The race to becoming Champion of the Series is almost coming to a closing as players Hathi Hangleg and Joseph Hoffman climbed the ranks on the leader board. Mr. Hoffman is currently 5th place, only nine points behind the 1st place spot. 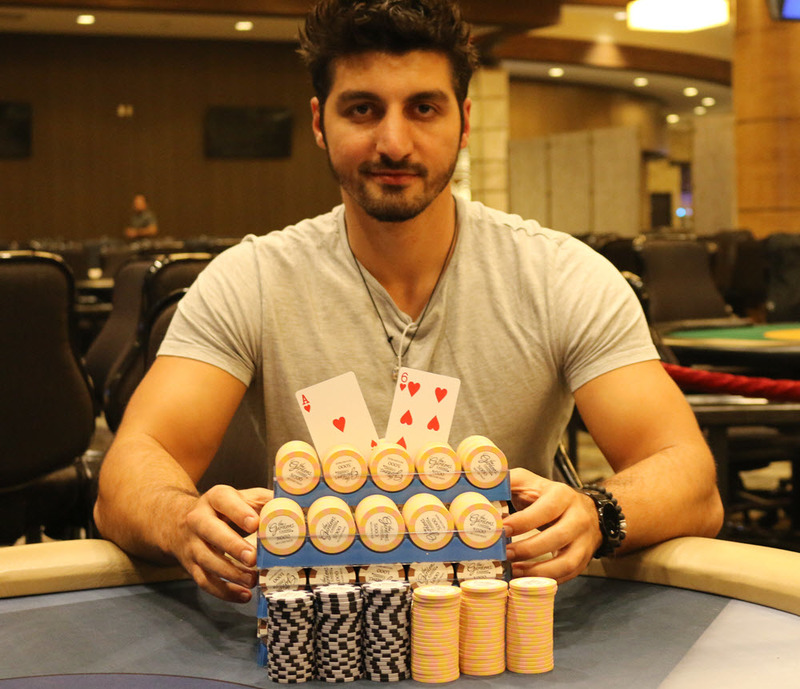 Timed Tournament usually lasts 6 hours with a $10,000 guarantee ft. the Action Clock by Protection Poker. With the Action Clock in play, players have 30 seconds to act on their hand. Love this event? The Gardens Casino offers regularly schedule daily tournaments featuring the Action Clock on Wednesdays and Thursday evenings! The event attracted 94 players with a total prize pool of $12,860. William “I Love Myself” Vo was chip lead at the end of the play earning him the eighth spot in the Champion of the Series leader board. 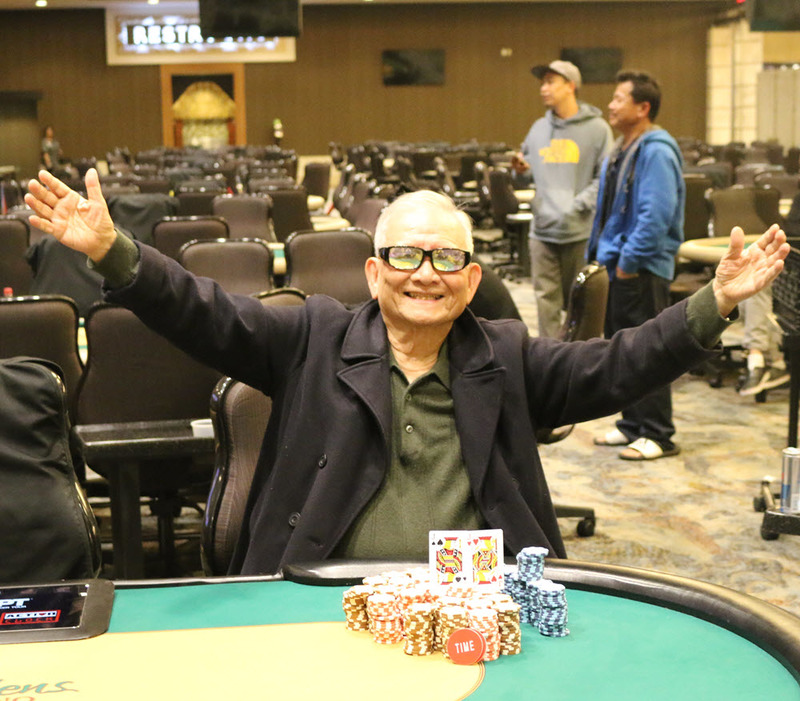 Players were able to buy-in directly for $175 or earn their seat or play in the single table Satellites and earn their seat into the $100,000 gte No Limit Hold’em tournament. This trophy event had an amazing turn out with $155,500 prize pool and a chance to earn a great deal of points towards “Champion of the Series”. Minimum payout was $480 with first place earning $38,880. The final ten chopped and chip leader Danny Nguyen with the vast majority of chips when home with the trophy and $34,420. Mr. Nguyen is currently ranked #2 in the running to becoming “Champion of the Series.” Don’t miss the final days of the Poker Championships and climb through the ranks for the title, glory and one week’s worth of buy-ins! 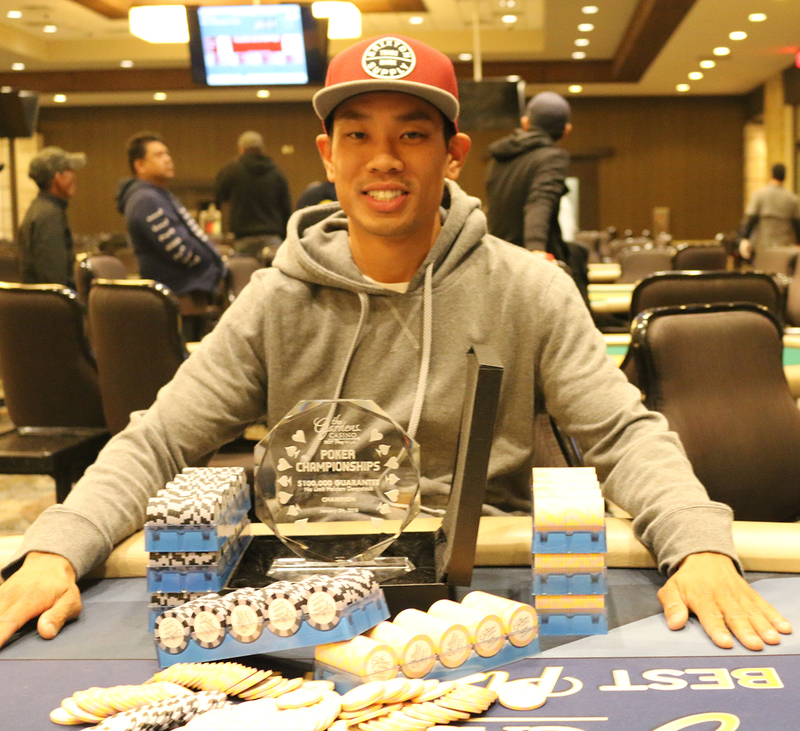 The $40,000 guarantee No Limit Bounty event gave players a chance to knock out their competition with a $50 payout for each player eliminated. Final table chopped with Bill Luu in the lead. Honorable mentions Mr. George Tahara at 80+ years young poker veteran jumped in swinging and out-lasted 183 players. Mr. Tahara is a force to be reckoned with! We expect to see him in many more games to come. 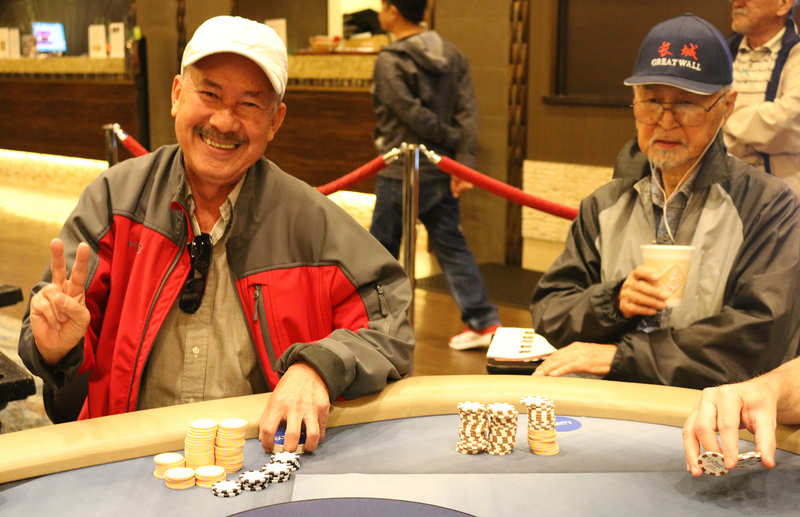 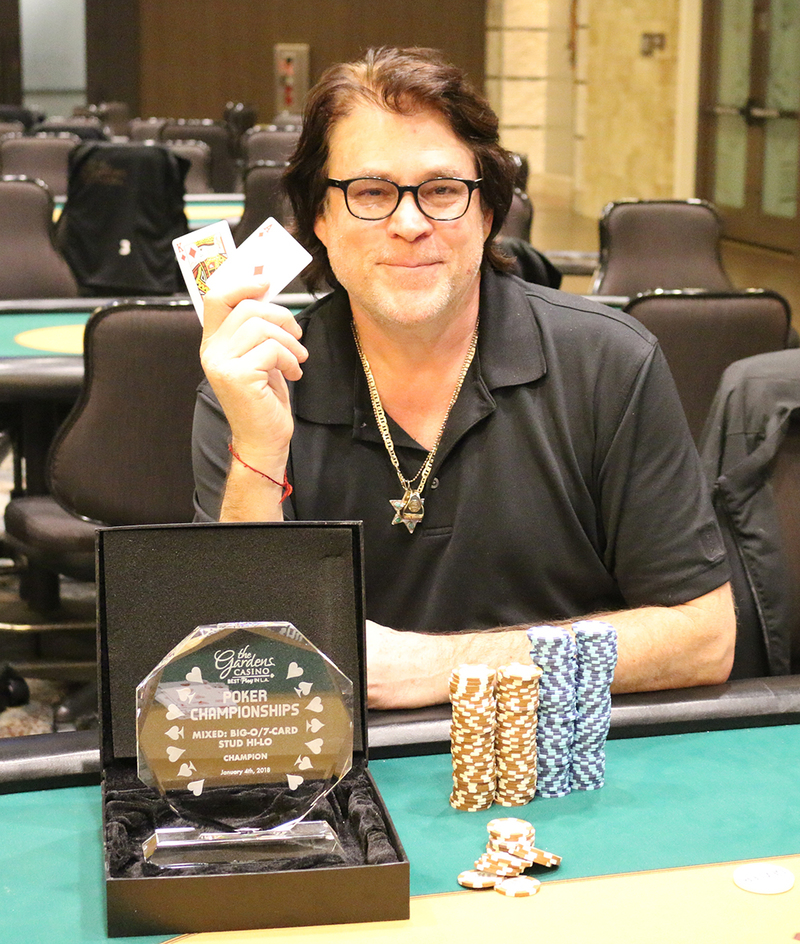 155 entries for the $30,000 guarantee No Limit Hold’em Deepstack with first place receiving $9,570. The game ended with the final 10 doing a chip count and Craig Dahl as the chip lead. 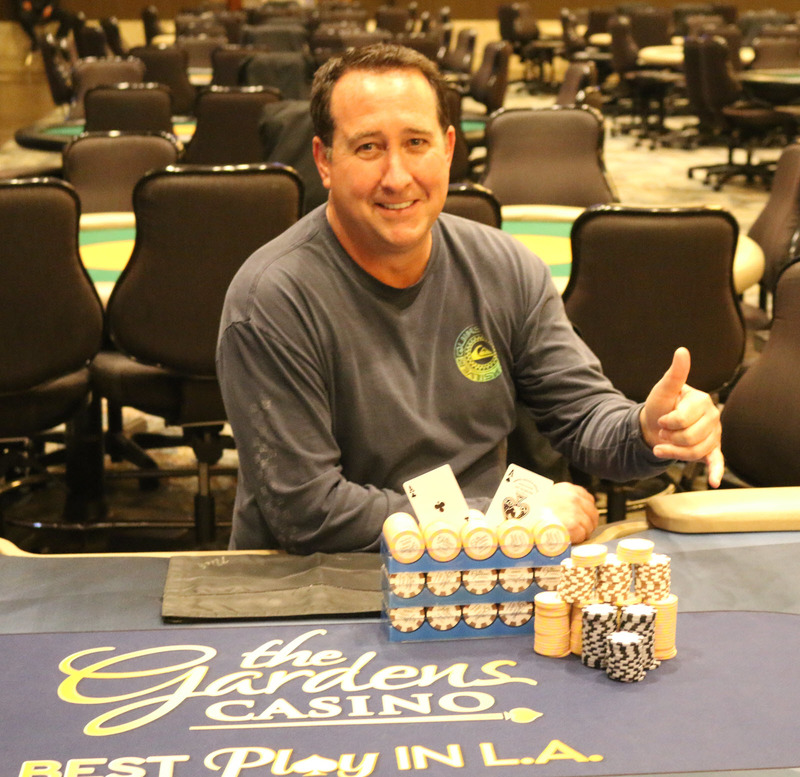 Day 2 of The Gardens Poker Championships started with No Limit Hold’em Deepstack, no re-buys, only 1 re-entry. 171 players turned out a prize pool of $23,940. The event ended in a six way chop with Antonio Braga as chip leader. 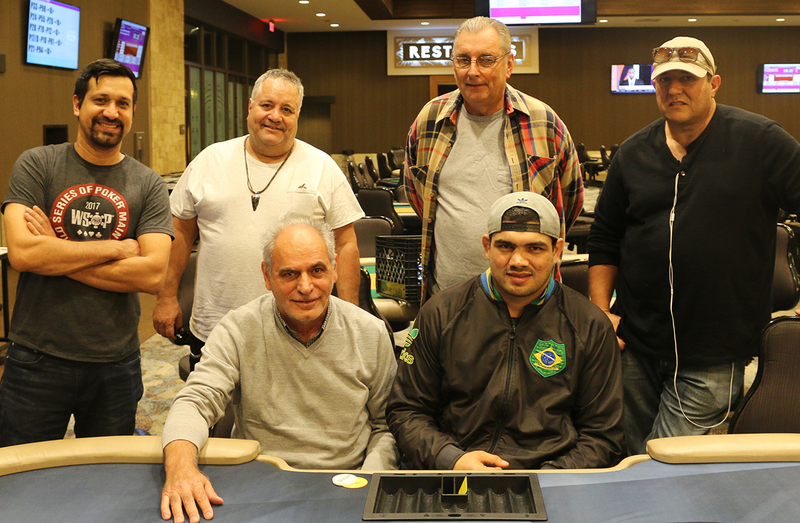 Trophy Event for Pot Limit Omaha ft. the Action Clock by Protection Poker with a $550 total buy-in attracted 2 WSOP Bracelets and 2 WPT Titles, Erick “E-Dog” Lindgren to the table. The game went down to the final two and Mr. Lindgren came up victorious and ahead in the race to become “Champion of the Series” 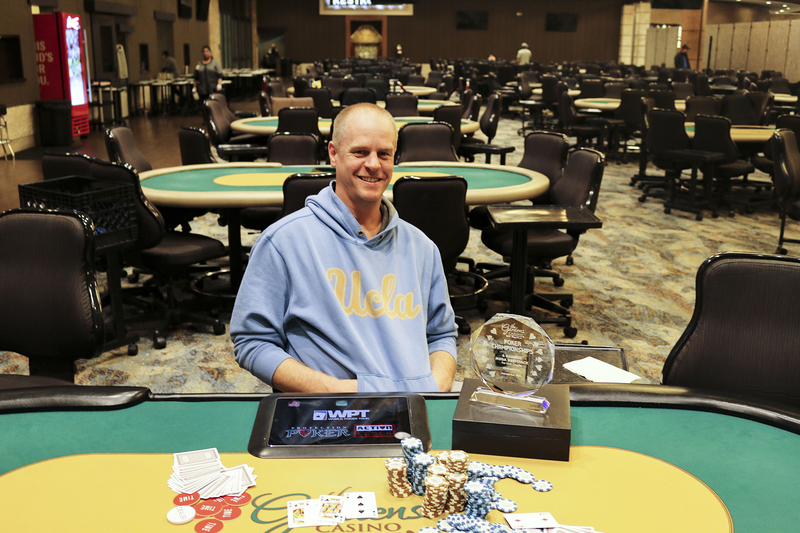 The Gardens Poker Championships kicked off the New Year with $50,000 guarantee bounty event. At 560 entries, the prize pool inflated to $104,350, more than doubling the guarantee.

Players entering the Poker Championships will be earning points from now till January 9 for the chance of the title “Champion of the Series” and take home a championship belt, a week’s worth of buy-ins to The Gardens daily multi-table tournaments and our exclusive VIP apparel.