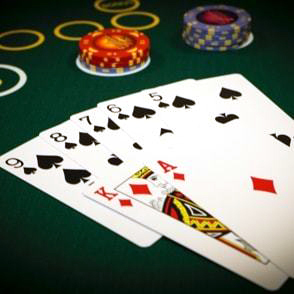 Joker’s Wild Pai Gow poker is played with a 52-card deck with the addition of 2 jokers.  The Joker(s) may be used as any card in the deck.

The casino dealer deals the cards into seven hands of seven cards. Six of the hands are distributed to seated players and one hand is given to the player-dealer position Once the cards are distributed, each player arranges his cards into two hands: a two-card hand (sometimes called the front hand) and a five-card hand (sometimes called the back hand).  The two-card hand must be comprised of a lower rank than the five card hand.  The goal of the game is to make two hands that are both higher than the two hands made by the player-dealer.  Pai Gow poker uses the same ranking of hands as in other high poker games.